When I think of Buitenveldert, I think of continuity. We have lived here for more than three years now. I did my last entry on this blog a few months before we decided to move here. Does it mean anything if I say that the world has changed since then? Meanwhile, we are here, in Buitenveldert, and it feels incredibly good – things can, indeed, sometimes change for the better.

Moving to Buitenveldert, when you have lived in the picturesque old center of Amsterdam, was something that needed explaining. Buitenveldert is modern – in the progressive, revolutionary, sense of the word. It’s outside the ring road that encircles the older part of Amsterdam, and is therefore often seen as somewhere out of town, not really part of it. It Buitenveldert! “Buiten”: outside, “Veld”: field. Out in the fields. It’s true, in one way. We are only a short bike ride away from the actual fields, cows and all.

But otherwise, Buitenveldert is very much part of the jolly old metrop. Going from the center to here is an uninterrupted, rather pleasant, bike ride (which I do every work day; my work place is still in the old centre). The buildings change from the white and dark green of the canal houses, to the brick-lined avenues of 1920-ies Zuid, to the large glass windows and tree lined streets of Buitenveldert. The A.U.P – the development plan that is the origin of this area – was established in 1935, and it meant to expand the existing city, not to build a new series of satellite towns separate from it.

Another aspect of this plan, which surprisingly still defines the shape of this city, is that the extensions reach out from the center like the fingers of an open hand. The spaces in between are a catalogue of what defines Amsterdam: the river Amstel, the IJ (the body of water that was the origin of the wealth of the town), the Noordhollands canal and the fields in the North, the Amsterdamse Bos, a wood-like park. Which means that, out here, you’re never far away from the aforementioned pastures and those cows.

So what about this thing with continuity? It is there, in the way Buitenveldert is connected, and part of, the city. It is also in the way that people here seem to have no urge to move to elsewhere. In our apartment block (the photo above shows how it looked when it was just finished, in the mid-sixties) there are a surprising number of people who got a place in, say, 1974, and never moved. This is reflected in the permanence of the buildings and the public spaces – there are some new additions, but overall the buildings are the same as they were when Buitenveldert was finished. The wispy branches of the young trees have all grown into reverend canopies. 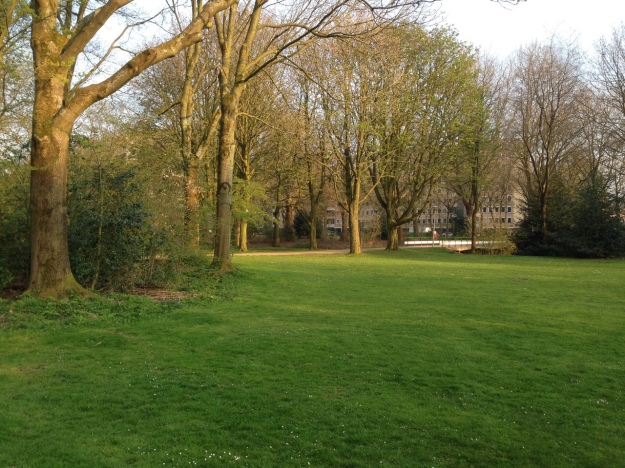 There’s another instance of continuity, more subliminal. It’s in the way the whole of Buitenveldert is a clever weave of interlocking patterns, made by the repetition and shifting of groupings of building blocks and court yards. Walking in our neighbourhood, as we often do, we are impressed by the way Buitenveldert is a whole, not a archipelago of isolated neighbourhoods.

I’d like to more fully explore the things that make me delight in living here: a good subject for a next blog post. Let’s hope it won’t take another 4 years to write it. Meanwhile, to end, another wonderful instance of continuity. I remember feeding the squirrels, when I was a child, in the Amsterdamse Bos (some ten minutes walking from here). Then they disappeared, for a long time. It was a disease, or maybe something else, I’m not sure. But in Buitenveldert they still are here.