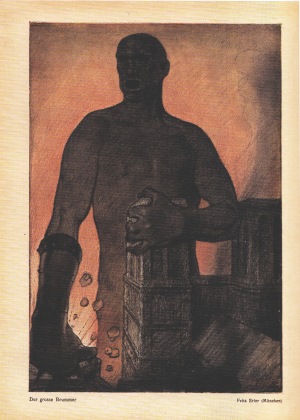 With the shooting rampage at Charlie Hebdo. I felt something different than what I felt with earlier acts of atrocity. Every single one makes me sick, but why was this one so particularly shocking to me? There was an “us-ness” that i felt – these people were my people – I felt a deeply held common value that was trampled here. I thought that this was something worth investigating.

That cozy “us” wasn’t there at all for the longest time. Only a hundred year ago there seemed nothing more insurmountable than the difference between the French and the Germans. A particular example is provided by the postcard that circulated as a result of a picture exhibition in Munich (1). It shows a Gothic church, over which hovers a giant man, one big hand crashing down, the other hand ready to grab the delicate structure. This painting won a prize in an exhibition, and the French were aghast. Clearly this was an evident sign of the inflated self-assumption and never ending will for destruction of the Germans. After all, hadn’t they trained their big guns at the gothic cathedral in Reims, to shoot it entirely to pieces?

The misunderstanding was monumental: the image, in Germans eyes, showed a fellow countryman protecting the venerable monuments of culture (and Germany had a claim on Gothic architecture ever since Goethe discovered the beauty of the cathedral in Strasbourg – then a German town). It was crystal clear, in their eyes, that the “Grosse Brummer” held a protective arm around the cathedral. It clearly showed the divide between “us” and the other, and no doubt it would have provoked the outrage in the men in the trenches. Yet another cause for war.

A claim to a shared culture, a world wide culture of enlightenment and the tolerance that comes with it, is problematic. We like to be the defenders of wit, because we understand the imagery of wit, and take it for granted that everyone else in the world does as well. But the visual language isn’t simple and unequivocal. An image won’t be understood equally by everyone, because images are shored up by other images, a frame of reference, a history. The problem immediately comes up when an image that is meant for a specific audience crosses the border (as with the picture mentioned above); and nowadays there are no borders for images. An image, appreciated by “us”, is easily and completely misunderstood by the “other”.

But when that happens, it can result in something dangerous; as a reaction to this misunderstanding, the rift grows deeper between us and the other. Which is what I felt – complete unwillingness to understand what moves these killers, and at the same time exasperation at the lethal unwillingness of the killers to try to understand something like irony or humor – that is: our humor. For now, the rift is huge. I only can hope that people on either side will do the effort to understand, so that there is a chance the rift will close. European history has shown that both is possible.

(1) the picture is from the book “Cathédrales 1789-1914, Un Mythe Moderne”, the catalog to the exposition with the same name in Rouen that gave a fascinating overview of how the cathedral was taken up in the imagery of modern France, England and Germany.